How do you know when your online marketing is working?  How many visitors need to go through your system, from keyword to landing page, before you can make a determination as to the effectiveness?  10 visitors…100…1,000…10,000?  You want to walk that line between spending enough money to make accurate determinations without wasting money on an ineffective conversion path.

Here’s the example I like to use with clients.  Consider your AdWords traffic to be a line of people waiting to checkout at the grocery store. When the store opens up another register, a percentage of the people would move to the newly opened register.  You can make determinations based on the results.  If there were originally 10 people in line, and 4 moved to the new line, you may draw conclusions that the majority of people stayed in the original line because the cashier was attractive, or the magazines next to the register were juicer.  However, if by random chance, 2 more people moved to the new line, your theory would have been disproven, not on fact but randomized chance.

Now, if there were 1,000 people on line, and 400 people moved to the newly opened line, you would have a stronger foundation to draw conclusions. Two people randomly changing lines would not statistically alter the outcome.

So what’s the magic formula?  How do you determine how many is enough without over spending on testing?

Here’s where the magic happens… 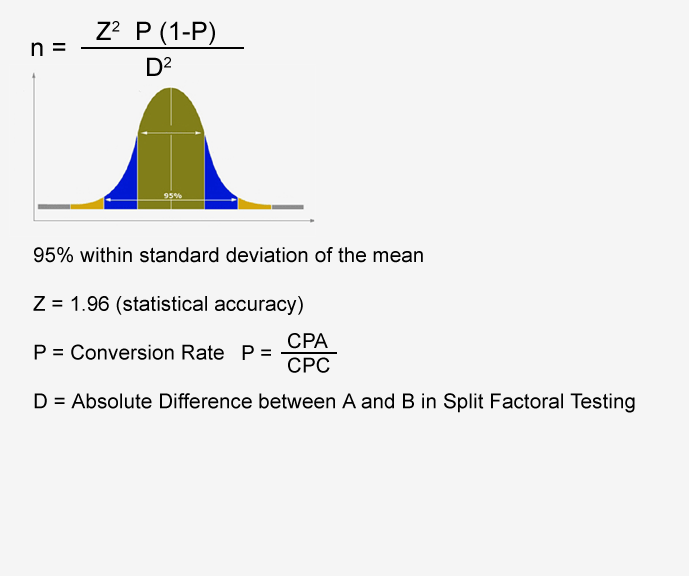 So what does this all mean?  It’s time for a trip back to math class, and it’s much easier than it probably looks.  All we’re doing is solving for a few variables.

Z = statistical accuracy.  We want 95% accuracy within 2 standard deviation of the mean, leaving 5% outliers.  95% accuracy mathematically equates to 1.96 (it’s easier to take my word for it).

P = the conversion rate, which is easily calculated by dividing the cost per acquisition (CPA) by the cost per click (CPC).

D = the ABSOLUTE difference between 2 factors (or landing pages).

We’ve mathematically concluded that with 2561 visitors, we have enough data to draw conclusions as to whether specific keywords, ads, and landing pages are effective or need edits.

Additionally, it’s important when making changes to make very few at a time.  If you make several changes at the same time, you won’t know which specific changes had a negative or positive effect.

At the end of the day, it all comes down to how much money you had to spend to gain a new customer.  Using math and statistics will get you to that lower customer cost with much less expense and risk.